I still remember the night we brought Chuy home. We were just two adults madly in love with each other, engaged for two days, and full of uncertainty as we planned for a last minute deployment where we’d be apart for over a year. The one thing that was certain was that we both wanted a Chihuahua puppy to help keep me company while Frank was in Iraq. I also needed all the Chihuahua tips I could get!

One night after work, we met an irresistibly cute 6 week old puppy. From the minute he walked into the room,  there was no second guessing that he was OUR dog. Little did we know he would be our once in a lifetime dog. He is OUR heart dog.  We didn’t even think about it, we just took him home without any preparation. Very out of character for how I make decisions! 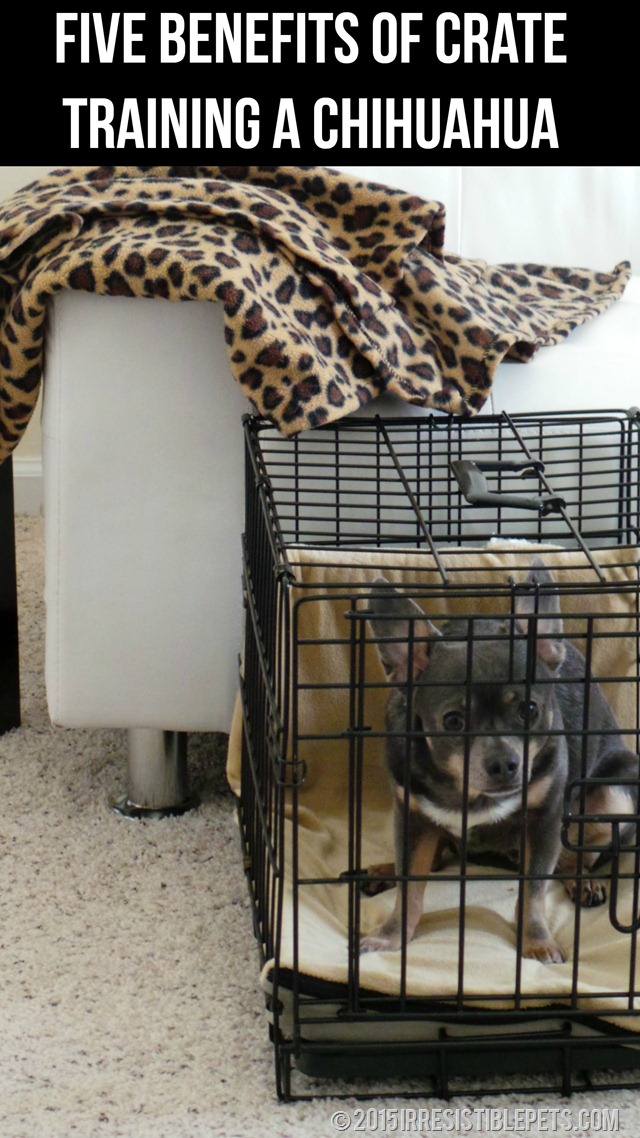 There we were, naïve pet parents, already in love with this 1 lb puppy, but clueless about what to do next. With new puppy in hand (literally), we headed to PetSmart to pick up the things we would need. We talked to the most helpful and sweet associate that walked with us around the store showing us everything we needed. She also educated us about selecting a crate and the benefits of crate training.

There are many benefits of crate training a Chihuahua or small dog. I want to share with you how it has benefited our life with Chuy (our little puppy) over the past 6 years.

We came home that first night and put together Chuy’s crate. Right from night one, Chuy had to know what was going on and be right up in the mix. Nothing has changed!

The crate helped Chuy (and my husband and I) learn how to potty train and respect boundaries in the home.  They kept telling us that a dog will never “go” where he sleeps. Leave it to my Chuy to challenge the status quo. I can remember a handful of times during the first month or so that Chuy pooped all over himself in the crate. That was such a joy to clean up! However, it didn’t take long before Chuy realized that he needed to “go” when he was outside and out of the crate. These days Chuy comes out of his crate and goes directly to the indoor puppy pad or straight to the back door, depending on the weather. There are at least two things I highly recommend for your crate before getting started.

1. A soft blanket or cushion that you can place on the bottom of the crate. It helps if the blanket smells familiar or has your scent on it. This is especially comforting for puppies who aren’t used to being separated yet. If you are training a Chihuahua puppy, try adding one of your t-shirts with your scent on it.

2. A water bottle to hang on the side. You don’t want your dog to drink so much that they have to hold it for hours but they should always have access to some kind of water. We use a hamster bottle so that Chuy can still get a sip of water if he needs it. 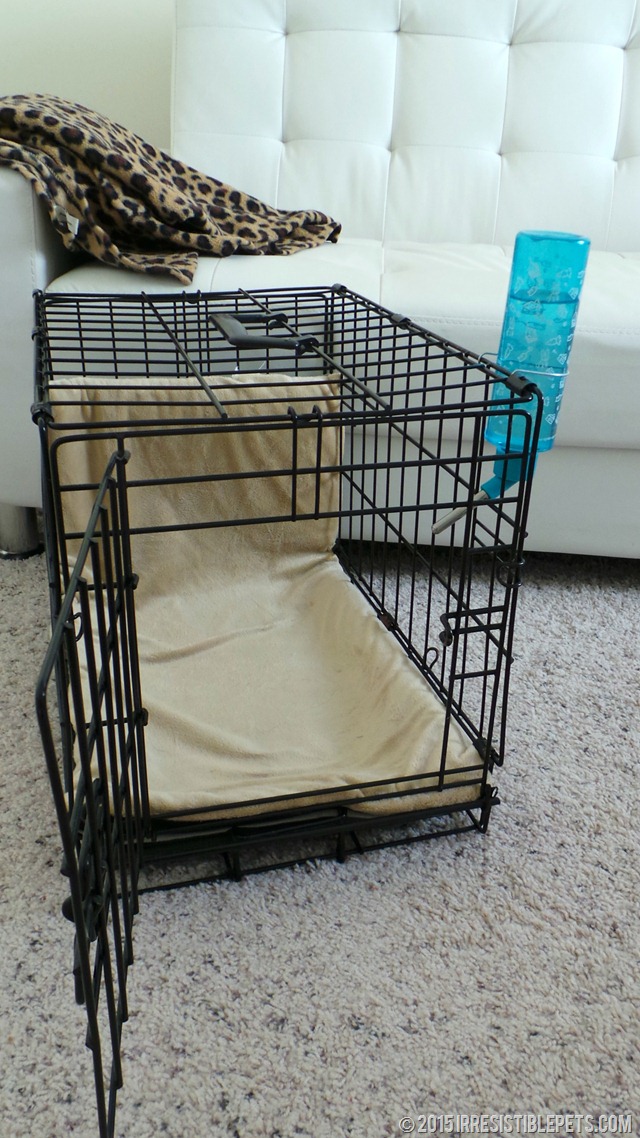 2. A Safe Place When We Aren’t Home

There’s a story I read that has always stuck with me when it comes to crate training. It was about a couple who went out to run errands and when they came home their precious Chihuahua was dead. They weren’t sure exactly what killed her but they think it was because of something she ate while they were away. I clearly remember that story solidifying all of my beliefs in why Chuy would always be crated while we were out of the home. It gives us peace of mind to know that he is comfortable and safe while we are out. Chuy is the type of dog to put anything in his mouth and I could never imagine leaving him at home to run free in the house.

As you may already know, Chuy was diagnosed with IVDD or Intervertebral Disc Disease a few years ago. From a medical standpoint, there’s only two things that the vet can recommend when he has a flare up. The typical RX for a flare up consists of a few rounds of RX medications and extreme crate rest. He just had another flare up around Super Bowl Sunday. We were able to set Chuy up in his crate so he could still watch the game with us. When he has a flare up, I put a heated crate pad under his blanket to provide extra support to his back. Only use a heating pad when you are monitoring your dog!

4. A Place to Travel

When Chuy has an extreme IVDD flare up, you can forget about touching him or picking him up. That’s not exactly convenient when you need to get him to the vet ASAP. I have to coax him into the crate and then place that into the car. Thank goodness he will get into the crate since he’s already used to it and feels safe in there. Driving with a Chihuahua in pain from IVDD is an entirely separate post. You might need a margarita when the day is over and I’ll just leave it at that!

We also have a collapsible crate that we use at the beach. We are beach bums, Chuy included! The soft crate gives Chuy a safe and cool place to retreat while we are at the beach. Most of the time he prefers running around on the sand though!

Let’s be real, all two stories of this house are really ruled by Chuy . . . or so he thinks! Yes, he sleeps with us in our King bed every single night. That isn’t going to change anytime soon. However, Chuy’s crate is a place of his own where he can hangout without his parents and just be by himself. He does go in there occasionally on his own and camp out. 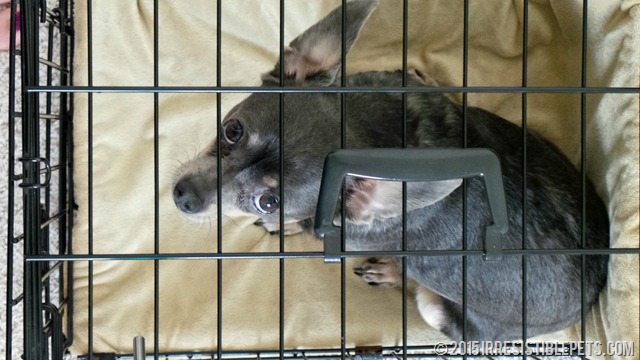 Where to Buy a Crate?

Now let’s talk about where to get a crate. If you want to shop in-person, I highly recommend PetSmart as that’s where we got both of our crates. You can also order dog crates online on Amazon.

We do have a much larger crate that we use when I have to travel and my husband is out of the home all day for work. That way Chuy has access to his bowl, bed, a puppy pad, and can move around more. It’s a nice backup but we don’t have to use it too often.

I hope that this list of benefits to crate training a Chihuahua will will help you determine what type of crate and carrier you need for your Chihuahua or small dog. Feel free to leave any questions or comments down below! Be sure to also stop by our Chihuahua Tips page for more helpful advice for parenting a Chihuahua.